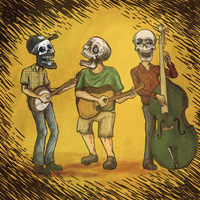 Since 2007, Greenland is Melting have put their own spin on folk, bluegrass, punk; penning an original sound with straightforward, hometown lyrics. Hailing out of Gainesville, Karl, Shaun, and Will have always approached their music with a drive and direction that perpetuates real, honest experiences put into porch-driven sing-along's. This especially rang true with their October 2008 debut self-release, "The Measure of A Man's Worth." Recorded in various bedrooms and bathrooms, these DIY recordings set some serious groundwork for the band as they honed their aesthetic and took their songs to the road. With extensive southeast touring under their belts, the trio not only found themselves with countless stories and experiences that paved the way for their new full-length, but an ever growing audience to woo with their earnest fervor and alluring three-part harmonies. Armed with banjos, harmonicas, a suitcase bass drum, and a slew of other instruments in tow, the Greenland boys break the typecast we all know as the "Gainesville sound" and bring a breath of fresh, folk-induced air to the masses. With an already large following due to their heartfelt performances and relentless work ethic, Greenland is Melting is more than ready to bring their sound to your back porch, kitchen, or basement. Their new full-length, appropriately titled "Our Hearts Are Gold, Our Grass is Blue,"